In 2021, our club, the Canadian Federation of University Women – St Catharines,  will celebrate our 100th Anniversary. In anticipation of this significant event, the St. Catharines Chapter, Anniversary 100 Liaison Committee has created the “History Corner.” 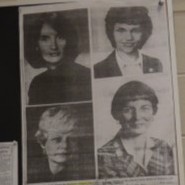 On April 23rd 1982, 220 of our members and most of the community were unfolding the evening Standard and saw this article about CFUW aka University Women’s Club. The headline read, “What are these women up to and why are men so concerned.”

Probably no one was more surprised to see this headline than our own members. There were photos of our members Denise Taylor, Alderman, Barb Black, Alderman, Jean Johnson, Alderman, Kathy Donevan, Board of Education trustee.

In 1957 Laura was quoted in the Standard as saying,  “Women will never take their place in the community and national affairs until they decide to go after it.” To our members of the time, her advice was to take off their white gloves, stop pouring tea and get into politics. She was considered controversial inside and outside the Club. She had her detractors but Laura was ahead of her time. She knew she was right, that there was power and strength in numbers and gender equality was important.

If Laura were alive today, she would revel in the news of the appointment of RCMP Commissioner Brenda Lucki, of our Minister of Foreign Affairs Chrystia Freeland, our Governor General Julie Payette and our Minister of the Status of Women Maryam Monsef.  For the International Women’s March, Laura would have knitted the hats, led the march and then invited everyone back to the house for a gourmet dinner. That was Laura!

The first CFUW St. Catharines meeting was held at the home of Laura Newman. The annual fee was 50 cents. Among the 18 charter members was Mary Louise Greenwood who had graduated from the University of Toronto in 1911. She was married to Dr. F.S. Greenwood who then served as Ridley’s school doctor. Thus began the long connection of CFUW St. Catharines members and Ridley College.
The support of Ridley to CFUW St. Catharines has continued through the years – we have held teas, dinners, meetings, workshops, and conferences at the school. The beautiful Memorial Chapel, Miller House, the Headmaster’s Residence and the home of the Lower School Headmaster have all been on our House Tours. For many years, back in the days of printed newsletters, one of Ridley’s staff members typed and formatted our monthly newsletter and ran it off on paper donated to us by the school. Thirty of our current members are or have been parents or grandparents of Ridley students or have had husbands, brothers, sisters or nephews attend the school.

At the first meeting of our club on December 12, 1921, “Education in all its Phases” was declared to be the club’s primary interest. It was true then. It is true now. Fourteen members were present at the meeting which was followed by a social. Today, we have approximately 200 members but there is almost 100 years of tradition behind our social.
It was clear that the Club wanted to encourage higher learning from the very beginning. Our first scholarship was awarded in 1927 and we have presented awards every year since then. Book reviews were a facet of the first meetings and books are still important to us.
Our 1st House Tour  took place on October 13, 1973 as a project for St Catharines’ 1976 centennial year. Using funds raised in 1973 and the 2 following years, our club donated $5500, matched by Wintario, to the new Centennial Public Library for the purchase of a Grand Piano which today resides in the Mills Room. Since then, revenues from our House Tour support our Scholarship Programmes.

A search of the Archives always uncovers fascinating miscellanea. For example, our research uncovered an evolution – not a revolution – but an intriguing evolution. Starting in 1921, our members’ names were recorded using their husband’s name. For instance, our Archivist, ‘Joan Clancy,’ would have been recorded as Mrs. Ken Clancy. In the early 1970s, that finally changed. Joan became known as Mrs. Joan Clancy. And then, in 2007, there was a change that has lasted until today. Joan is now recorded as Joan Clancy. Another evolutionary path involved our scholarships. In 1927, we awarded the Club’s first scholarship! From 1927 to 1934, our scholarships went only to male students. After 1934, female students became recipients but, it was not until around 1942, that we adopted an official policy to award our scholarships to female students only. 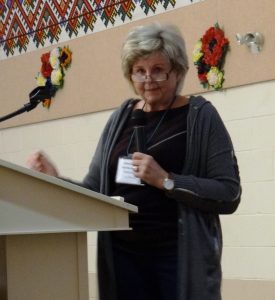 The Anniversary 100  Liaison Committee is collecting historical facts, reminiscences and reflections to compile a booklet recalling

the history of CfUW St. Catharines and commemorating the 100th Anniversary of the club in 2019.
Some of the committee members bring some personal reflections to the General Meetings. On February 14th, 2017, Caroline Nolan cited the importance of the United Nations Day for Women and Peace on March 8th. She mentioned the solidarity reflected in the Women’s March on the day after Trump’s inauguration. And she quoted from Meryl Streep’s speech at the Golden Globes, “Disrespect invites disrespect. Violence incites violence. And when the powerful use their position to bully others, we all lose.”
Gail Neff also alluded to the Women’s March and her participation with the 200 or so participants in the St. Catharines’ contribution to

the March. She walked with Pat Milland and Sue Hughes, proudly wearing her “pink pussy” hat to support antidiscrimination and support for women in all walks of life.
Bettianne Matheson spoke of becoming a member of the St. Catharines chapter as a young bride in the mid 1960s. Betty Freidan and Gloria Steinem were in the news supporting feminism but Bettianne particularly remembered St. Catharines’ own Laura Sabia, who became president of CFUW National and was instrumental in petitioning then Prime Minister Lester Pearson for a National Royal Commission on the Status of Women. 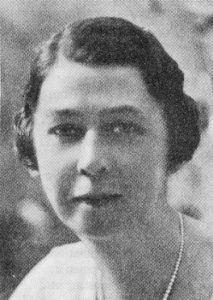 At the November Meeting in St. Catharines, a group of three members performed a vignette focussing on three of the Club’s charter members. The “Liaison 100” created “Lightning Strikes”  a series of short, focussed slices of our Club’s history. This month, the three dynamic charter members described were Laura Newman, Mary Louise Greenwood and Lily Bell.
Current member Barb Legg  took on the role of Laura Newman and, speaking in Laura’s voice, explained how the Club started with meetings held in members’ homes.
Mary Jane Waszynski portrayed Mary Louise Greenwood  describing her role as the first club president and her activities in the community.
Trish Loat embodied Lily Bell and spoke of her impressive role in the Club and the city.  Susan Pruyn, humorously shared some personal memories of Lily Bell, who had been her neighbour many years ago. 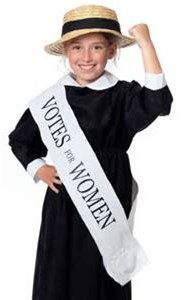 Did you know that CFUW National will turn 100 in 2019 and CFUW St Catharines will reach that landmark in 2021? That’s 200 years of collective woman power!
Here we look back at the context or setting for the birth of CFUW. What were the issues? What were the headlines in the second decade of the 20th century?
During the war, social events revolved around fundraisers (such as dances and card parties) to raise money to send overseas. Women met frequently and dependably to pack supplies or knit for the soldiers. As well, there was remarkable industrial expansion that began after the beginning of World War 1. It opened many opportunities for women. Thousands of women went to work for the first time filling positions as in munitions factories.
The end of the war brought euphoria and pride. For women, the future looked especially bright. Women could vote and they had a new role as wage earners. One in seven was in the labour force. The war had emancipated them. Women were well established in the teaching professions and were entering law, medicine, social work, journalism and nursing in larger numbers.
For women, there was a new world of choice around the corner. It was in 1919, the National Federation CFUW was born. “Education in all its phases was declared to be the first interest of the new federation.”
Thus we began.